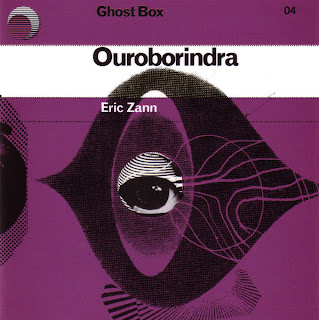 Sidereal release of eclectic occult sampledelia and possessed instrumental vignettes taking its moniker from one of my favorite H.P. Lovecraft stories. In it the protagonist rents an apartment and is soon bewildered all nights by the maddening wails of his neighbor's violin, he eventually discovers that his neighbor is nothing more than a conduit for undefined extradimensional forces which possesses Zann nightly with their intonations and ululations across the void of space. Likewise this album is of a distinctly different sort than most of the other Ghost Box releases; a certain antiquarian pre-70s focus remains, but it is turned towards arcane mysteries of a malignant and misshapen sort. Like Anworth Kirk, or a beatless Demdike Stare in full-Haxan mode, Eric Zann has its closest sister in Mount Vernon Arts Lab. But rather than the latter's mostly analog electronic focus, Ouroborindra merges its sampledelic soup of radio signals from non-euclidean channels with wailing strings, brass, percussion instruments, likening their free skronk to the occult possession of the Lovecraft antagonist, with a knack for turning improvisation into unconscious malignancy rarely seen out of the more jazz-oriented elements of the Miasmah label (Kreng, Kaboom Karavan, Marcus Fjellström). Grisly and enveloping vibes.

"Don't you get it yet? It must work like ... a recording. Fixed in the floor and the walls, right in the substance of them. A trace... of what happened in there. And we pick it up. We act as detectors - decoders - amplifiers."

"Inside the infernal box are impossible spaces, dark screens and mirrors, terrible traces of light, calcified thought forms and endless idiot mutterings. The switch is thrown and the magnetic coils begin to generate their obscene flickering images. This contraption might have been conceived by the Old Ones long before it was assembled by human hands." 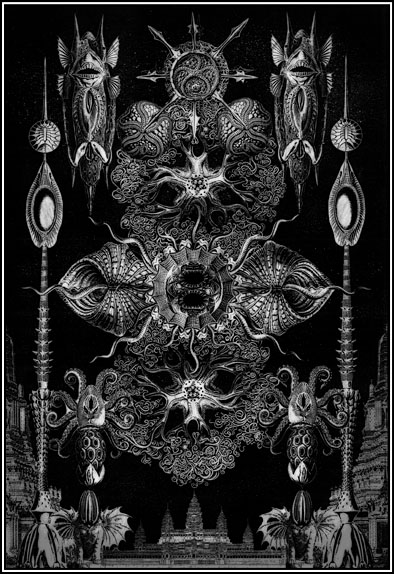 Posted by Luminous Insect at 4:09 PM